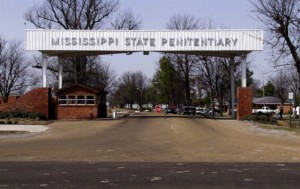 The entrance of the Mississippi State Penitentiary in Parchman.Mississippi Department of Corrections / via Reuters file

Inmates at the Mississippi State Penitentiary in Parchman say chronic staff shortages and rampant violence have led some prisoners to insert their own catheters, treat their own stab wounds and suffer through seizures without medication.

In many instances, there is one guard for every 160 inmates, according to a lawsuit filed Wednesday in U.S. District Court in Greeneville, Mississippi.

The suit is the second filed in as many months with the help of rappers Jay-Z, real name Shawn Carter, and Yo Gotti, real name Mario Mims, who have been protesting the “inhumane and dangerous conditions of confinement” in prisons. The pair on Thursday also released an open letter to Mississippi Gov. Tate Reeves calling for him to shut down the facility, which they write has become “a shameful symbol of society’s moral decay.”

The complaint was filed on behalf of 152 inmates who say that they are under “constant peril” at Parchman and that the environment is “so barbaric, the deprivation of health and mental health care so extreme, and the defects in security so severe, that the people confined at Parchman live a miserable and hopeless existence confronted daily by imminent risk of substantial harm in violation of their rights under the U.S. Constitution.” 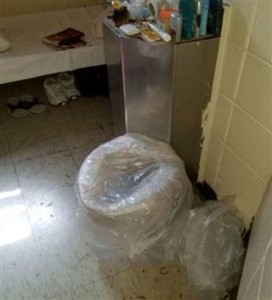 Parchman, the only maximum-security prison for men in the state, has more than 3,500 inmate beds and has grappled with a history of inmate abuses, corruption and racial segregation.

An inmate named Thomas Lee, 49, was so in need of mental health care that before he took his own life in January, his last words were reported to have been: “I’m tired of this s—. They don’t care about me or my food. I’m about to kill myself!”

Inmates also describe rat feces, cockroaches and bird droppings contaminating their meals, as well as toilets and showers in a “perpetual state of systemic failure.”

The guards, the inmates allege, have played an active role in the deteriorating conditions, failed to act out of fear for their own safety and looked the other way amid the violence. “Plaintiffs have resorted to tying their cell doors closed at night to prevent guards from allowing other inmates to enter and assault them,” the suit says.

Since Dec. 29, at least 18 people have died in Mississippi state prisons, some as the result of gang-related rioting and suicide, officials said. Mississippi has one of the highest incarceration rates in the United States.

Prison reform advocates have said that it’s unusual for the Justice Department to look at four prisons at one time rather than just one and that it indicates how entrenched and immediate the problems remain.