The storm is producing so much rain so quickly that many freeways, city streets and cars were flooded Wednesday morning. The roads are even worse than Tuesday and the CHP is encouraging drivers to take it slow and don’t brake suddenly to avoid hydroplaning.An Urban and Small Stream Flood Advisory has been issued for the Bay Area for Wednesday. A High Wind Advisory has been issued for the Bay Bridge and San Mateo Bridge. Also delays of more than three hours have been reported at SFO.

In San Francisco, crews removed multiple cars trapped in deep water near the southbound Hwy 101 Cesar Chavez off-ramp. The drivers all got out safely. One driver said it was like being in a flash flood. 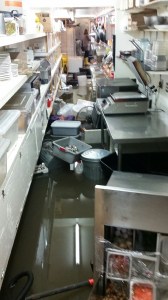 Heavy rains also caused significant flooding in the area 27th and Dolores Streets, with water rising all the way up to the wheel wells of several cars. 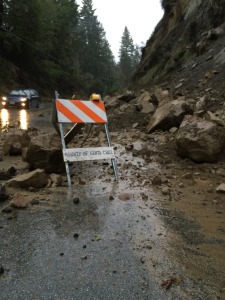 Bear Creek Road off of Highway 9. A mud and rock slide blocked the south lane of traffic. Wednesday, December 3rd, 2014

Just before 2 a.m., a CVS Pharmacy sustained damage severe enough to force it to close its doors for the day. Fire crews were shocked with what they found.

“Took a look to the left and you could see that the roof had collapsed and there was a good amount of water coming from the ceiling area,” said Captain Dan Bonfante.

An aging room was no match for pooling water and a ventilation system weighing hundreds of pounds.

“I saw it was dark, so now I’m just hoping I can go home and there is electricity,” said resident Cheryl Mercurio.But that, too, may be a problem. Falling trees took out utility poles and cut off power, leaving dozens in the dark.

Near Grahm Hill and Mount Hermon Roads, city crews say wind and rain damage have shorted the box controlling the traffic signal. The red and green lights were displaying at the same time.

But the road hazards continued on Bear Creek Road off of Highway 9. A mud and rock slide blocked the south lane of traffic. Fire crews are pulling double duty, directing drivers around boulders the size of a small car.

But despite damage and inconvenience, residents of Santa Cruz County seem to be taking it all in stride. 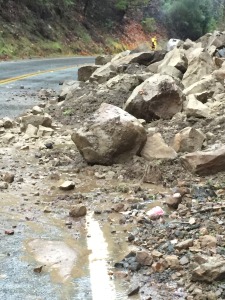 Bear Creek Road off of Highway 9. A mud and rock slide blocked the south lane of traffic. Wednesday, December 3rd, 2014

The storm is bringing a dangerous, yet spectacular lightning show to the Bay Area. Huge bolts have lit up the sky all night and morning. There were about 18 lightning strikes over a period of thirty minutes at one point last night.