This is the statement released by the Santa Clara County District Attorney’s Office: 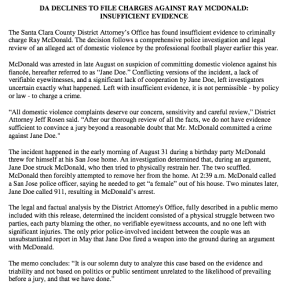 Prosecutors said in a release Monday that they were unable to charge McDonald because of conflicting versions of what happened, a lack of verifiable eyewitnesses and a significant lack of cooperation by the alleged victim, McDonald’s fiancee.

“All domestic violence complaints deserve our concern, sensitivity and careful review,” District Attorney Jeff Rosen said in the release. “After our thorough review of all the facts, we do not have evidence sufficient to convince a jury beyond a reasonable doubt that Mr. McDonald committed a crime” against his fiancee.

The DA’s statement said no one was left with “significant injuries.” They add this case was neither easy nor simple, and that facts surrounding the incident remain unknown despite an extensive investigation. They went to say that their decision to not charge McDonald with a crime should not be perceived in any way that their office does not take domestic abuse claims seriously.

“I appreciate the seriousness of the situation and I understand and respect that law enforcement had a job to do, which is why I cooperated fully with their investigation from beginning to end. I am relieved that the DA’s office has rightfully decided not to file charges. I want to thank everyone who was supportive during this difficult time,” McDonald said in an email to the media.

The district attorney tells ABC7 News that when police arrived, the victim had visible injuries. But after the initial interview with the victim, whom they identify as “Jane Doe,” she refused to cooperate with the investigation.

Cindy Hendrickson, Deputy District Attorney, said in a news conference, “I think what we are saying is the evidence is consistent. Both parties state that Jane Doe struck first and her minor injuries are consistent with restraint in a struggle. How much force was used during that struggle? That’s something were are not going to know because we didn’t have the photos from 48 hours later or her cooperation beyond that.”

The arrest came only days after NFL Commissioner Roger Goodell announced stiffer penalties for players accused of domestic violence, including a six-week suspension for a first offense and at least a year for a second. That move followed scrutiny over former Baltimore Ravens running back Ray Rice’s two-game penalty stemming from his arrest on an assault charge in February. 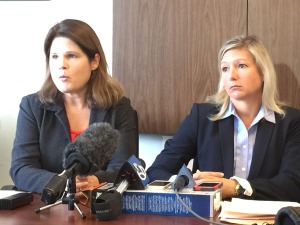 According to the DA’s office, an investigation determined that McDonald’s fiancee struck McDonald during an argument at his home during his birthday party and he then tried to restrain her.

The two scuffled and McDonald forcibly attempted to remove her from the home, the statement said.

McDonald called a San Jose police officer, saying he needed to get “a female” out of his house, the statement said. The fiancee subsequently called 911 and that led to McDonald’s arrest.

According to a memo prosecutors sent to Rosen, both McDonald and his fiancee said she struck him first. The memo says her injuries were “consistent with restraint and an ensuing scuffle, not an attack.”

McDonald and his pregnant fiancee got into a fight after a woman attending the party told her some women were getting too friendly with McDonald. McDonald’s fiancee, who was sleeping upstairs, came down and confronted him, according to the prosecutors’ memo.

Following the arrest, 49ers CEO Jed York, general manager Trent Baalke and coach Jim Harbaugh repeatedly said they have zero tolerance for domestic violence, but rather than bench McDonald they agreed to let “due process” play out before making a decision about his future with the team. Harbaugh said he wouldn’t allow any player found guilty of domestic violence to be on his team.

He also said at the time that public pressure wouldn’t affect how the 49ers handled McDonald’s situation.

“The issue of domestic violence is important to us, as it is throughout society. We have taken this allegation seriously, just as we have taken the principles of due process seriously. We have said from the beginning that we will consider the information available, allow the facts to lead to our decisions and respect the judicial process. Based on the information available to us and the District Attorney’s decision not to file charges, there will be no change in Ray’s status with the team,” the San Francisco 49ers said in an email released to the media on Monday morning.

ABC7 spoke with several players after the Monday morning’s announcement. Each expressed happiness that this is all over now. None seem to feel as though this investigation was a cloud over the team or a major distraction.

An eight-year NFL veteran, McDonald has been a key member of one of the NFL’s fiercest front seven units.