Home / Uncategorized / FOX5’s LIKE IT OR NOT – ”Reclining Your Airline Seat” yay or nay?
Tweet Pin It
Email this page

Most ‘ignorant’ thing you can do on flight – according to fed-up travel writer. Bram Weinstein Britt McHenry Nick Smith Marina Marraco Discuss! 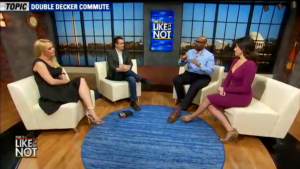 Anna Gingras explained in Outside Magazine : “There’s one thing I hate about flying, and it’s not the overpriced tickets or the baby crying three rows ahead of me in economy class.”
OK… “It’s the people who recline their seats with total disregard for the person behind them.” Anna added that reclining in your chair is acceptable if your flight is longer than four hours.

Her article was shared on Tiwtter where it quickly stirred others up.

“Shouldn’t you be angry at the airline for selling a cramped seat? Or yourself for not paying for more space? If I pay for a seat that reclines I’m going to recline.”

“As a 5’1” tall woman the back of my head hits the top of the seat where most people’s necks hit, forcing my head forward for the duration of the flight, causing neck pain at times for days if the flight is long.