ALAMEDA, Calif. (KGO) — The wind created a lot of new hazards at a popular Bay Area golf course. Winds knocked down at least half a dozen trees at Chuck Corica Golf Complex in Alameda, near Oakland International Airport.

Other parts of Bay Farm Island also have tree damage.

Until Tuesday, one tree stretched more than 100 feet into the air. But it, and the root system that secured it, were no match for the heavy winds that swept across the Bay Area and brought it down. Once tall and proud, it has become nothing more than a makeshift jungle gym for neighborhood children until it can be reduced to wood chips.

“Right here in Bay Farm Island, it was actually old farm land so nothing really happens out here,” said Armen Phelps with Bay Farm Island. “So it was pretty exciting for this area.”

Across town, the scene of toppled trees was multiplied. 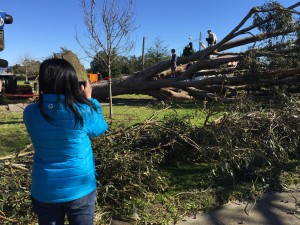 “The hole over here, the tree is practically covering the green, right in front,” said San Leandro resident Paul Gregerson.

In fact, no part of the 45-hole golf complex, that is mostly landfill, was spared from the damage brought by the wind.

“Just be glad you weren’t out here yesterday because it’s very dangerous,” said Larry Stewart. “These trees have very shallow roots. But they’re tall and thin. So they’ll go down with not even as severe wind as that.”

Crews worked as quickly as they could on Wednesday to clear the tree from Island Drive because they knew there were many more they needed to get to.