Well, it makes perfect sense to me! I hated carrying two phones – but I did it anyway.

I watched.  I was transfixed. 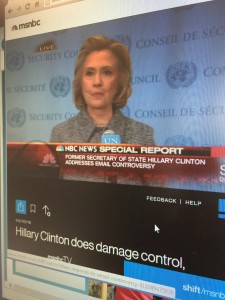 Secretary of State addressed the media shortly after giving a speech at the United Nations about women’s empowerment. Why she did not use a government email account during her tenure as the U.S.’s top diplomat. 3/10/15

Admittedly, I kinda like all things Clinton; they’re masters at their craft and they know how to work a room.

In the 20-minute news conference, held at United Nations headquarters, where she had just delivered a speech about women’s empowerment, former secretary Clinton admitted that the initial reasoning behind her using a personal email account for official business as secretary of state was simple: She didn’t want to carry around two phones. “I thought it would be easier to carry one device for my work,” she said.

Clinton says this was allowed at the time. It might’ve been easier then, too, but Hillary will be the first to tell you that times have changed. “I thought using one device would be simpler, and obviously it hasn’t worked out that way.” Nope. Shole ain’t!

At the time of me writing this, the Republican Party’s leading presidential prospects had no immediate response. But the chairman of the Republican National Committee, Reince Priebus, blasted Clinton’s comments as “completely disingenuous.”

Not to side with HRC, ’cause we know how crafty those Clintons can be, but I kinda wanna buy her story.

While working for Disney/ABC – we were not allowed to have our work email on our personal phones, nor were we allowed to use that phone as our “primary” phone (meaning calls were calculated for on/off hours according to your work schedule).

The only alternative, carry a personal phone and your work phone – or be without one of them; there was no way around it.

To further complicate things, Clinton says she directed aides to delete some 30,000 emails from her personal server after determining that they were not related to work.  A move that inherently raises questions about her transparency (or lack thereof).

Her predecessors as secretary of State had used private emails for at least some of their correspondence, Clinton said, a point that State Department officials have confirmed. 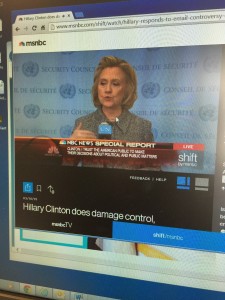 Hillary Clinton said she deleted emails stored on her private server during her time at the State Department because she “didn’t see any reason to keep them.” 3/10/15

Clinton’s exclusive use of private email during her four years as the nation’s chief diplomat has drawn criticism on on both sides of the political isle. A major issue has been whether doing so allowed her to bypass the laws designed to ensure that the public and members of Congress can obtain records of public business.

Clinton says she had a number of emails about personal issues that should not be considered part of the public domain.  She may be right. She meant no harm. She thought she was being good, doing the right thing.  But the road to you-know-where was paved with “good intentions.”

Republicans are making it clear that the issue of Hillary Rodham Clinton’s email is not one that will fade soon.  I believe them.

Although I hated doing it – I carried two phones because I knew what my employer expected – even if it wasn’t explicitly written.

Something tells me Hillary Clinton knew the same.