I’m one of the millions of Americans who believe that the day doesn’t start until the first cup of coffee. Simply put, whoever created coffee, deserves to have their name listed among the greatest minds of our time. You, Sir or Madame, are a saint ?

I love nothing more than the first sip. 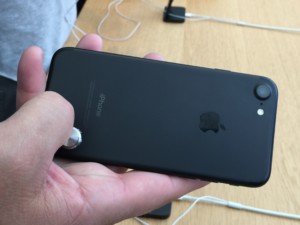 …but this week’s rollout of Apple’s iPhone 7 reminded me that for some, there is an invention creating even greater passions; the iPhone.

By any measure, the iPhone is a brilliant and life-changing invention that has helped shape the face of modern society. 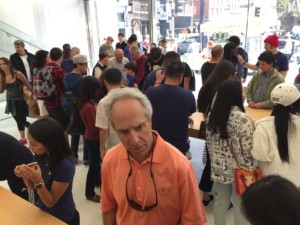 The emphasis of online orders meant some fans who lined up well ahead of Apple’s warning left empty-handed or with their second choice. Apple Union Square – San Francisco, CA

The energy around the iPhone has been kicked into high gear this year. It seems like almost every other advertisement you see has something to do with cell phones, 4G service or the latest applications – but do you really need a smartphone to stay connected? Well the hundreds in line at Apple Union Square – would say, “yes.”

I’ve heard it all…

“Their products are fantastic.”

“My old phone had gotten so slow.”

“I only use it for the camera.”

“I only use it for social media.”

By all estimates, the iPhone, Apple’s first smartphone, has redefined the mobile industry, putting computing in millions of people’s hands, purses and pockets for the first time. 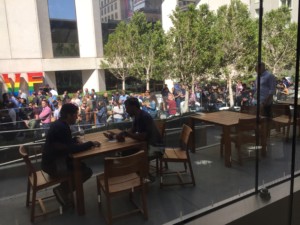 Hundreds of people were lined up outside the Apple store on Post Street, hoping to buy one of the shiny new gadgets when the doors opened at 8 a.m. Apple Union Square – San Francisco, CA

Despite, or maybe because of Apple’s die-hard commitment to absolute secrecy ahead of its launches, the usual flurry of leaked images, rumors and pure conjecture that’s flooded the internet for the past few months had reached a fever pitch.

With more than 1 billion users worldwide and 2.5 million apps – and counting – available across Google and Apple’s digital marketplaces, smartphones are impacting day-to-day life in every way.

Ten years ago, we’d all be crowding around a television to hear what’s happening, and now we have our phones.

The launch of the iPhone in 2007 transformed the humble mobile phone from a one-trick tool for communication into a catch-all platform whose functionality is constantly evolving. 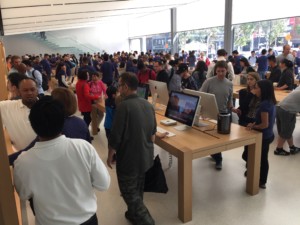 According to the Nielsen group, smartphones account for four out of every five phones purchased in the U.S. They estimated that a smartphone now sits ina bout two-thirds of American adults’ pockets.

Like my morning coffee, millions cannot live without their smartphone.

I need the java – and they need their digital security blanket.

The thousands and thousands of iPhone users around the world can thank Steve Jobs and Apple for creating that need.

As for me, I’m writing this and giving a wink and a nod to Juan Valdez.