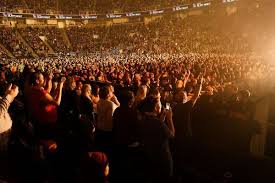 Just hours after Santa Clara County reported its first coronavirus-related death, the county has implemented a mandatory ban on all large gatherings in hopes of containing the spread of the deadly virus — the most sweeping preventive measure yet taken in California.

The ban, which will begin at midnight on Wednesday and span at least three weeks, will apply to any “mass gathering” event with more than 1,000 attendees, Santa Clara County Counsel James Williams announced at a press conference Monday evening. The Santa Clara County Sheriff’s Office and police departments throughout the county will enforce the ban.

The county has defined a “mass gathering” as anything that brings together 1,000 or more people in a single room or single space at the same time, such as an auditorium, stadium, arena, theater, or any other “confined indoor or confined outdoor space.” The ban does not include normal operations at airports, shopping malls and centers, offices or other spaces where 1,000 or more persons may be in transit.

In the midst of the growing global outbreak, the ban is one of the most sweeping precautionary measures put in place by any region in the country, but other American cities have been heading in the same direction in recent days.

Last week, the city of Austin forced the cancellation of the popular South by Southwest music festival. And the city of San Francisco has temporarily banned all large events in city-owned buildings — a move that has forced the San Francisco Symphony and Ballet to cancel all performances through March 20. But that city has not gone so far as to restrict events in privately owned facilities, including Golden State Warriors games and shows such as “Hamilton” and “Harry Potter and the Cursed Child.”

Santa Clara County officials say the two main goals of the ban — which they had instituted on a voluntary basis a week ago — are to reduce the number of infections and slow the spread of the virus in the community.

“Slowing the spread is critically important because it enables people, businesses, educational institutions and the health care system to prepare and institute measures to keep functioning while social distancing measures are in effect,” Sara Cody, the county’s health officer, said during the press conference.

Santa Clara County is one of a handful of areas in the country where there have been documented instances of community transmission — meaning the COVID-19 virus is circulating and passing from person to person here.

The ban will apply to San Jose Sharks games and other events planned for San Jose’s SAP Center. The ban will not be enforced at airports, shopping centers or any place where people are in transit, county officials said. They also said they are not recommending the closure of schools.