I’ve said it before, the morning shift is ROUGH! 1:30 am (the time I get up to start my morning) really comes EARLY Arrrgh! But what ya’ gonna do?

Drivers lined up for gas Monday morning as prices dipped to a level rarely seen, especially here in the Bay Area.

High supply and low demand has pushed gas prices to an all-time low.

It’s become a treat for drivers. The national trend has averages at $3 a gallon for the first time in 2014.

“Even lower,” said an enthusiastic driver. “We gotta claim it, right?”

Claim it and you shall receive it.

We found drivers in line trying to do just that. Lines were so long, finding an empty pump became a virtual game of musical chairs. Still, those drivers believed it to be worth the wait.

We were at a gas station in San Jose on McKee Road when prices fell another two cents before our eyes. 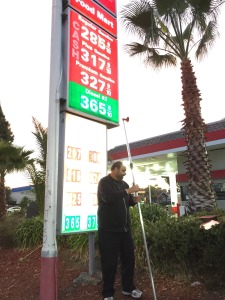 prices drop 12 cents in a matter of seconds.

“Even better for delivery drivers, man,” said San Jose resident Anthony Vallarta. “I’m delivering across the Bay Area and cheaper gas helps me and my family.”

Why is this happening? Analysts chalk it up to increased U.S. oil production and more fuel efficient cars, and refineries switching to production of less expensive winter blend gasoline that’s made for an unprecedented 34 cent per gallon drop since July.

“With someone who commutes, it does add up over the weeks and the months,” said Buki Akanbi.

The San Jose resident commutes seven days a week. She’s saving anywhere from $10 to $20 a fill-up, leaving extra cash in her pocket.

“I do look for the best deal and this is the best deal in San Jose, been coming here for about two years now and they’ve always had the best gas prices,” Akanbi said. “Even living in Sunnyvale, I would come here to get gas sometimes.”

According to AAA, without any natural disasters or man-made incidents, gas prices will continue to fall; just in time for the holidays and Thanksgiving, the busiest travel weekend of the year.

“Right before the holidays? Hey, you couldn’t ask for a better blessing,” Barrera said. 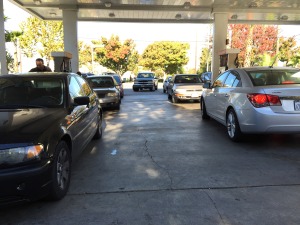 The South Bay isn’t the only place seeing a dip in gas prices. In San Francisco, some spots are charging $3.19 a gallon. That’s down nearly about 60 cents from a month ago.

In Concord, we found gas prices as low as $3.03 a gallon. Prices were clocking in at $2.99 a gallon in Mill Valley. And in Vallejo, gas was $2.93 a gallon. That’s according to website GasBuddy.com.