Sixteen year-old, Mexican-born Jorge Avelar-Lopez is surrounded by love. He says family support has pushed him and helped him to succeed when so many things outside his home are working against him, such as crime.

Not being able to walk to school doesn’t mean he isn’t thriving once he gets there.

Jorge started learning to code in the 9th grade. He then enrolled in a summer computer course at Stanford and now he’s using a new language called Ruby. It was Ruby that gave birth to the idea to change his community.

“As a low-income minority, I know a lot of people overweight,” he said.

Jorge decided he wanted to do something about it. He is one of 20 students to receive the prestigious Latinos on the Fast Track, or LOFT, fellowship. The program rewards Latino gamers and their ability to improve society.

They were all invited to Washington, D.C. last week, to show off their apps. Jorge created Trim-fitt and Trim Fitt 2: Trash Smash. “It tries to encourage people to loose weight,” explained Avelar-Lopez.

Trim fitt works like this: You sign up and you’re connected to a community of others struggling with weight. Your age, fitness level and BMI (body mass index) are matched with the others. A plan is developed to best help you achieve your individual fitness goals.

But he knew kids would be a tougher nut to crack, so he came up with Trim Fitt 2: Trash Smash. “It’s like Whack-a-Mole, instead it has healthy and unhealthy foods floating around the screen,” he explained.

Kids playing the game “smash” the un-healthy foods and earn points. Avelar-Lopez says, “And when they see it in real life, they’ll say, ‘That’s in the game.’ You know how little kids are, that’s in the game, I’m not supposed to eat that.”

He says the apps are teaching healthy food choices early on and helping to change the face of his community. 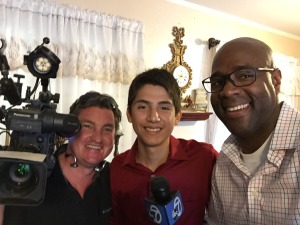