SAN FRANCISCO — PG&E and Chairman and CEO Tony Earley were honored today (June 18) for the company’s long-standing support of employees who serve in the National Guard and Reserve by the Employer Support of the Guard and Reserve, a Department of Defense office that develops and maintains employer support for Guard and Reserve service. 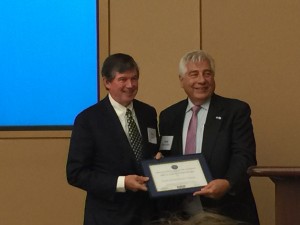 Andrew Wiktorowicz, chairman of the Employer Support of the Guard and Reserve, presents the Patriot Award to Tony Earley, left, for his support of our employee guardsmen and reservists. Thursday, June 18.

Andrew Wiktorowicz, chairman of the Employer Support of the Guard and Reserve, presents the Patriot Award to Tony Earley, left, for his support of our employee guardsmen and reservists.

Earley, a Navy veteran, received the Patriot Award, which is given to a supervisor or boss for their support of employee reservists through various measures — including allowing for flexible schedules, providing time off before and after deployment, caring for families, and granting leaves of absence.

Earley was nominated for the award by Bryan Barr, a PG&E customer outreach specialist in Sacramento and a lieutenant in the U.S. Coast Guard Reserve, who cited Earley’s personal outreach and commitment to PG&E’s military community.

In addition, Earley was presented with the Seven Seals Award, which recognizes significant individual or organizational achievements, initiatives or support that promotes the ESGR mission.

Joining Tony Earley for the awards were several PG&E employee reservists and members of the Employer Support of the Guard and Reserve. Thursday, June 18.

PG&E was given the Above and Beyond Award, which acknowledges employers who have gone beyond the legal requirements of the Uniformed Services Employment and Reemployment Act. Employers receiving this award provide their Guard and Reserve employees additional, non-mandated benefits such as differential or full pay to offset lost wages, extended health benefits, and other similar benefits.

Joining Tony Earley for the awards were several PG&E employee reservists and members of the Employer Support of the Guard and Reserve.

“Going the extra mile to support employees who are serving our country is the right thing to do for them and their families,” Earley said. “It goes hand-in-hand with PG&E’s long-standing commitment to veterans. Since World War I, we’ve had policies in place to hire, train and retrain veterans while helping them develop careers. We’re proud to be acknowledged by the ESGR for supporting our National Guard and Reserve employees.” 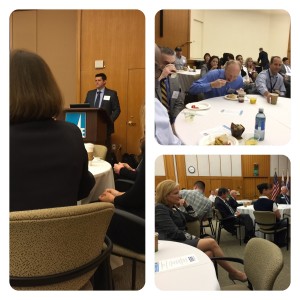 PG&E has received honors from the ESGR in the past. Last year, the utility signed a Statement of Support for employees in the Guard and Reserve. In 2002, the company was given the Pro Patria Award for demonstrating extraordinary support for Guard and reserve employees. In 2003, PG&E earned the Secretary of Defense Employer Support Freedom Award.

PG&E is a leader in employing and supporting veterans. The company has been ranked among the Top-100 Military Friendly Employers for the last three years by G.I. Jobs Magazine. PG&E’s PowerPathway training program was recognized by Vice President Biden, who visited a training class consisting solely of veterans in April.