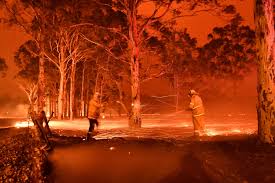 Victims of the massive bushfires are returning to their neighborhoods and seeing the destruction firsthand. Insurers report there’s nearly half a billion U.S. dollars in damage. That estimate is expected to rise sharply.

Crews are still racing to get the upper hand, before worsening conditions threaten to intensify the fires later this week.

Firefighters have been battling the fires for about five months now, with nearly 200 bushfires still burning across southeast Australia. And all this destruction is unveiling a nation in crisis.