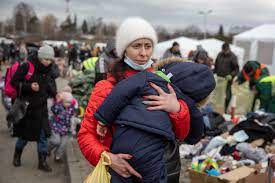 A woman carries her child as she arrives at the Medyka border crossing after fleeing from the Ukraine (Photo: AP)

The Russian assault on Ukraine has produced approximately 3.7 million refugees, while millions more are displaced within the country. The scale of the human catastrophe is hard to comprehend, and the upheaval for the people forced to flee their home country is tragic.

The closest comparison is to World War II, where the conflict forced 60 million Europeans to become refugees, according to Time magazine. That was a much larger war, though, with far more combatants.

The United States is taking in 100,000 refugees from the Ukrainian conflict. At the end of WWII, roughly 350,000 displaced Europeans began new lives in the U.S. By the end of the Vietnam War, 735,000 people had fled the combat and repression to live in the U.S. Those refugees primarily came from Vietnam and Cambodia.

The 100,000 refugees President Joe Biden wants the U.S. to accept is over and above the 125,000 per year, the country already accepts.