An Alabama man honors George Floyd by walking 1,000 miles from his home state to the spot where Floyd died in Minneapolis.

Today I make history for you

Today I make a difference for you

I love you son
#MARCHFORCHANGE 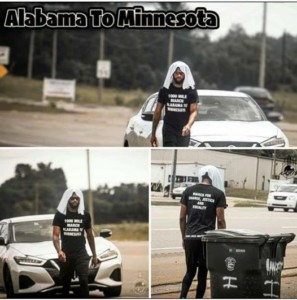 “Good afternoon my FB friends and family. For the last couple days I have been mentally preparing myself for this journey.

As a black father who raising a black son, I feel like am obligated to do my part in making a change and better future for my son.

I see what’s going on and I understand why my people are mad. I’m not here to judge anyone, I say do what you have to do to make sure your voice is heard. In 1965 MLK marched to Selma for us to have the right to vote.

In 2020 I Terry Willis will walk from Alabama to Minnesota for our right to be seen as equals. 1000+miles. Tomorrow at 10am I will start my journey. MARCH FOR CHANGE, JUSTICE AND EQUALITY. MY Voice will be heard.

I will go live tomorrow as I start this journey. I’m asking everyone to please share.”

Terry Willis began his 1,000 mile walk from Hunstville, Alabama on Tuesday and he’s headed to the site where Floyd was killed in Minneapolis. Willis says he’s hoping for change.

“I think a lot of people are just fed up. Because they are like all right, enough is enough. You just murdered this man in front of the world, on camera, that can’t happen, we can’t let that go. And that’s why I am marching 1,000 miles for change, justice and equality.”

He’s hoping others will join him along the way. 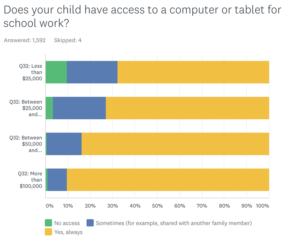 Four out of 10 of the poorest U.S. students are accessing remote learning as little as once a week or less, according to a new survey from ParentsTogether, an advocacy group.
By contrast, for families making more than $100,000 a year, 83% of kids are doing distance learning every day, with the majority engaged over two hours a day, the survey found

The nation’s schools shut down in-person learning in mid-March, and only a few states, including Colorado, Montana and Wyoming, have experimented with opening classroom doors since then. From the beginning, experts in distance learning warned that it can magnify inequities, with the most able and highly advantaged learners humming along while learners who need more support fall far behind.