The country’s president initially perceived as a political lightweight and an easy target for Putin now represents a legitimate commander in chief of a country at war.

A Ukrainian jet makes a hard turn outside of Kyiv on Feb. 25.

A soldier who died blowing up a bridge. Civilians blocking Russian tanks. President Zelensky’s defiant videos. The Ghost of Kyiv. Whether they’re well documented or urban legend, these stories are boosting Ukraine’s resistance.

Acts of unthinkable bravery by Ukrainian citizens have already ascended into legend across the country, boosting morale and galvanizing a nationwide resistance that has already proved formidable in the face of Russia’s massive and experienced military.

Vladimir Putin’s full-scale invasion of Ukraine is only several days old, and examples of spirited defiance are piling up: A group of border guards who defied a Russian warship order and were captured or killed. A military unit that took on 34 Russian attack helicopters and dozens of paratroopers during a battle for a key airport. A Ukrainian soldier rigged a bridge to blow up in order to stop a Russian advance on Kyiv and sacrificed his life to ensure the blast was successful. Civilians lying down in front of rolling Russian tanks and berating occupying troops to their faces. Tens of thousands of civilian volunteers took up arms and rushed to the frontlines. 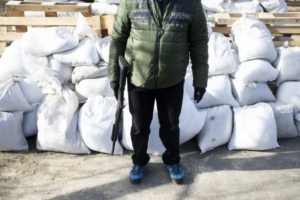 Alexander, born in Russia and who lived in Donetsk prior to 2014 and is fighting for Ukraine, at an improvised checkpoint on Feb. 26 outside of Kyiv. Alexander said he “became Ukrainian” after Putin attacked.

Though many examples of heroism have been documented by videos and photos, some are hard to verify, and there are already a few that seem to be urban myths. Perhaps the most famous early example is the viral tale of “The Ghost of Kyiv,” a single pilot who some believe single-handedly shot down six Russian fighter jets.

But all these stories, combined with President Volodymyr Zelensky’s popular and defiant videos where he stands firm in Kyiv and exhorts all his fellow citizens to take up the fight, add up to a national narrative of bravery for a people who have fewer soldiers and fewer weapons than Putin’s forces.

“When you see all that, you feel like the whole nation is against this aggression. And it’s really hard to fight the whole nation,” Maria Popova, a Ukrainian communications professional in Kyiv, told BuzzFeed News. “The general feeling is that we are ready to fight here, and we are really angry.”