The piece sparked outrage over its compassionate portrayal of the former Eastern Michigan football player, which hinted that Holtzclaw’s violent actions were a result of his failure to become an NFL player.

“I made a grave mistake,” wrote Arnold. “I accept responsibility for that.”

Arnold, who no longer writes for the blog, said “at least four editors” signed off on the piece, which took him two months to write. 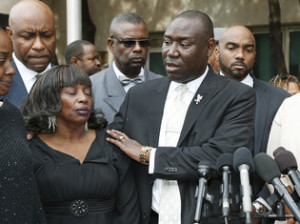 Benjamin Crump, right, a lawyer, with Jannie Ligons, one of the victims of sexual assault by Daniel Holtzclaw, during a news conference outside the Oklahoma City courthouse. Credit Sue Ogrocki/Associated Press