You can catch episodes of my Travel Channel show Street Eats broadcasting to over 130 million viewers in 13 countries on the Asian Food Channel. 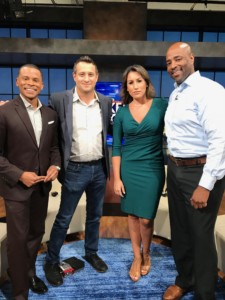 I have a foundation in journalism and most recently used those skills as a reporter for KGO-TV and the ABC7 News Team.  I blog regularly and read as much short-story fiction as time will allow.

I was Host of the summer reality show “American Inventor” on the ABC network; and in 2009 was chosen as talent for international airline carrier, Qantas.

In 2010 I was hired to host “The San Francisco Chronicle/SFGate.com 53rd Annual International Auto Show.” I can also be seen in the Season 8 Premier of the Emmy Award Winning drama “24”.

My Introduction to television has been anything but traditional.  While serving in the United States Army in Germany, I worked with a team to create training and support videos.  Upon completion of my service, I attended Santa Rosa Junior College where, through the guidance of three dynamic instructors, I discovered the world of Speech and Forensics.  My interest in debate would eventually lead me to the stage as both an actor and a public speaker.

I hold a baccalaureate degree from the University of California, Berkeley and attended Emerson College in Boston for my graduate work.  While working toward my Master’s degree, I worked as a photographer/truck operator for WPRI-TV in Providence, RI.  Upon completion of graduate school, I was hired as a General Assignment Reporter at WTVD-TV in Durham, NC.

Prior to my return to California, I was a field correspondent for ABC News One, providing complete, breaking news coverage of national events – mostly, hurricanes in Florida. Shortly thereafter, I was chosen to anchor the morning news at FOX-29 www.myfoxphilly.com in Philadelphia and provide live coverage of special interest stories for a segment called “Nick in the Neighborhood.”

I am a voracious reader, engaged voter and the proud descendant of Mississippi sharecroppers. I am the product of a single-parent home and hold strongly to the belief that service to our country and/or community should be required.

Lastly, the opinions expressed herein are my own and do not reflect the views, positions or thoughts of my employer.  Stories written by others will always be properly credited.

Nick Smith is a member of SAG-AFTRA, NABJ, a veteran of the United States Armed Services.