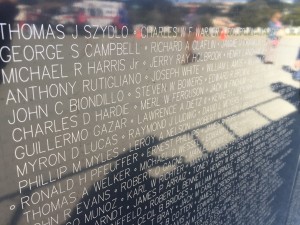 “The Wall That Heals”, a half-scale replica of the Vietnam Veterans Memorial, at Golden Gate National Cemetery in San Bruno, April 9 through April 12, 2015.

SAN BRUNO — “This can be a tough place to be, but it’s so important that our country remembers, “said Romie Bassetto, a veteran of the Vietnam War where he served as a convoy escort. Bassetto isn’t as spry and agile as he used to be, and he often uses a mobilized wheel chair to get around. Limited mobility hasn’t stopped him from leading a team of volunteers bringing a replica of the Vietnam Veterans Memorial across the country.

“The Wall That Heals,” the replica of the Memorial in Washington, D.C., stands as a symbol of America’s honor and recognition of the 58,000 men and women who served and sacrificed their lives in the Vietnam War. As Vietnam veterans age, many have never visited the Memorial Wall, and some never will have that opportunity, which is why the replica is so important.

And, PG&E played a role in helping put the replica on display during its recent stop in San Bruno. 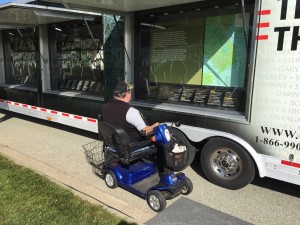 Vietnam Veteran, Romie Bassetto, takes a moment to reflect. “The Wall That Heals”, a half-scale replica of the Vietnam Veterans Memorial, at Golden Gate National Cemetery in San Bruno, April 9 through April 12, 2015.

“It almost didn’t happen. We almost couldn’t get the power we needed to light and run this exhibit – but you guys came through. You helped us out,” said Bassetto. “The guys over at PG&E got us the generator we needed.”

Romie Bassetto is a veteran who volunteers as the Memorial replica makes stops around the nation.

The exterior sides of the trailer that carries “The Wall That Heals” displays photos of service members whose names are found on The Wall, along with letters and memorabilia left at The Wall in Washington. The museum also includes a map of Vietnam and a chronological overview of the conflict in Vietnam. The exhibit needs electricity to light and operate the displays. Neither Bassetto nor his team had access to a power supply, so he reached out to PG&E for help.

Through private contractor, Aggreko, members of the utility’s electric distribution department were able to secure, without cost, the use of a generator. It was used to supply electricity during the exhibit’s stay in San Bruno.

“This was an important thing to do,” said Frank Pizzileo of Aggreko. “This is our way of honoring the men and women who gave selflessly in defense of their country. Our strong partnership with PG&E and their commitment to community made it a ‘no-brainer.’”

At 250 feet, the “The Wall That Heals” is half as long as the original and consists of powder-coated aluminum and is supported by a metal frame and sandbags.

Working with a contractor, Aggreko, PG&E was able to provide a generator to illuminate the Memorial replica during its recent visit to the Golden Gate National Cemetery. 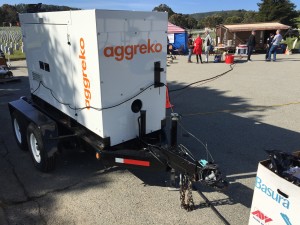 The replica’s latest stop was Golden Gate National Cemetery in San Bruno to commemorate the 50th anniversary of the beginning of the American ground war in Vietnam.

“Sometimes, those who come to see the wall are too emotional to even look at the names or touch it,” said Bassetto. “I respect that and we give them their space.”