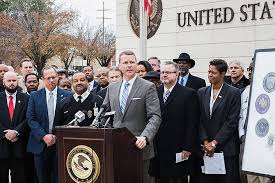 HATTIESBURG, Miss. (WDAM) – A federal judge sentenced three Hattiesburg men last week under Project EJECT, which is an initiative by the U.S. Attorney’s office in the Southern District of Mississippi to reduce violent crime.

McCaskill was sentenced to 41 months in prison and three years of supervised release after he pleaded guilty to being a felon in possession of a firearm. He was indicted on July 24, 2019. According to the U.S. Attorney’s office, McCaskill had previous convictions in Forrest County for possession of a stolen firearm and possession of cocaine.

Starrett sentenced Martin to 126 months in prison and five years of supervised release after he pleaded guilty to armed robbery. According to the U.S. Attorney’s office, Martin was a getaway driver in armed robberies at two gas stations on March 4, 2019 and an attempted robbery at Captain D’s on March 26, 2019. Shots were fired at all three robberies. Martin was arrested on March 28 and indicted in April.

Foster was sentenced to 24 months in prison followed by three years of supervised release after he pleaded guilty to being a felon in possession of a firearm. He was arrested on Feb. 11, 2019 after two guns were found in his possession during a search of his apartment. He had prior felony convictions out of Forrest County for burglary and receiving stolen property. Foster was indicted in July.

All three cases were investigated by the Bureau of Alcohol, Tobacco, Firearms and Explosives and the Hattiesburg Police Department. Assistant U.S. Attorney Andrew W. Eichner prosecuted all three cases.