One of the fiercest Senate opponents of President Barack Obama’s actions on immigration says whatever the Republican response is, it won’t include impeachment.

Republican Sen. Jeff Sessions of Alabama told the conservative Heritage Foundation, “We are not going to impeach or move to impeach.” He did insist that Congress can use its power over spending to affect the immigration initiative.

In the House, Speaker John Boehner (BAY’-nur) says lawmakers will not stand idle and let Obama’s initiatives take effect. But the Ohio Republican offers no hint of what steps the House might take to block Obama’s move to offer deportation relief and work permits to 5 million immigrants in the country illegally. 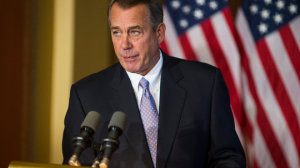 Republicans are looking for a solution that would satisfy angry conservatives without alienating moderates, Hispanics and other voters who will be crucial in the 2016 presidential election. Possibilities include suing Obama or trying to fight his moves through the budget process.

Conservative lawmakers are pushing to insert language in upcoming must-pass spending bills to block Obama’s order. Party leaders warn that could lead to a government shutdown.