Home / Uncategorized / TAKE ME TO THE RIVER: MY DAY IN SONOMA COUNTY! PARTS OF GUERNEVILLE UNDER WATER AS RUSSIAN RIVER FLOODS
Tweet Pin It
Email this page

The severe storm that brought torrential rains and hurricane force winds on Thursday has subsided, dumping near record rain throughout Northern California. 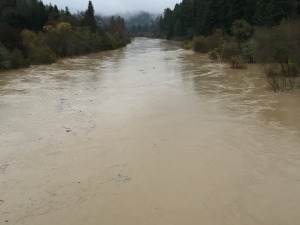 Waiting for the river to crest and waters to recede Guerneville Residents keeping an eye on the river’s swollen banks. Friday, December 12th 2014

In the North Bay, it’s been an anxious 24 hours for people living near the Russian River. The river crested at flood stage Friday morning, cutting off roads and some homes.

Henry Hamlin is nervous about the Russian River creeping ever so close to his house. He spent the night frantically moving furniture in the basement to higher ground.

“I had no clue where the water would stop,” Hamlin said. “It’s a foot from entering my basement.”

“For now they’re stuck,” Stevie Lindborg said. “One road in, one road out!”

A contractor rescued what tools he could from the house he’s building, now, partially submerged.
Carrie Armstrong has seven feet of water in her backyard, but she’s not worried.

“I raised the house last year, so it wouldn’t flood,” Armstrong said, “20 feet”

A pee-wee golf course became an obstacle course for kayaks.

Greg Hawkins and family came to see the flooded river. “You never know when it’s going to flood on the Russian River,” he said “It’s been doing it for years.”

Throughout the Bay Area, waves slammed onto waterfronts, ferries were bound to their docks, many schools canceled classes and the gusting winds had motorists tightly gripping their steering wheels on the Golden Gate Bridge, where managers created a buffer zone to prevent head-on collisions by swerving cars.

A power outage in San Francisco forced the closure of the Montgomery BART station for six hours. Riders had to get off either at Embarcadero or Powell Street station and walk in the rain. Flooding was the big problem at the San Bruno BART station, where clogged drains flooded the ticketing area. The station was closed for nearly two hours while crews mopped up the water.

There were major delays at the San Francisco International Airport. Some 240 flights were canceled and most of them were short flights along the west coast. Flight Aware said delays at SFO were averaging between 30 minutes to an hour.