by Nick Smith
Updated 50 mins ago
Flights trying to land at San Francisco International Airport are delayed Monday morning, because of the wind, not the rain, according to flight tracking system, Flight Aware. That isn’t helping frustrated passengers trying to get home from their Thanksgiving holiday.

Flights were delayed landing at SFO on Monday morning because of the wind, not the rain.

“I have no choice, I have to go, and I have to get there no matter what,” said traveler Angela Simoes.

Simoes says her weekend of fun is over and it’s back to the office.

“I’m traveling for work and we have an annual user conference that is always the week after Thanksgiving,” said Simoes.

Fortunately for her, travel on Monday is a major improvement over Sunday’s nasty weather that forced widespread delays of up to four hours. It cancelled of dozens of flights.

The Sunday after Thanksgiving is considered one of the busiest days at SFO with an estimated 140,000 people passing through.

Yakel says successfully getting passengers in and out of SFO on-time is the goal. The rain has stopped departure & arrival boards are clear.

Travelers are finding the TSA lines, manageable, but just like those moving through SFO, Yakel says he and his team are also beholden to San Francisco’s fluctuating weather that can change things on a dime.

“Conditions are clearing, but we may see some delays locally, 45-60 minutes in range,” said Yakel.

“I planned like two months ahead maybe,”said traveler Jasmin Samudio.

After a tearful goodbye to her mom and dad, Jasmine boarded her flight to Southern California

“Yeah, I checked in last night. Now I’m currently planning on coming back for Christmas, so now that’s like, my next homework,” said Samudio.

According to the flight tracking service Flight Aware, flight delays across the country continue, with the hardest hit being airports on the east coast. 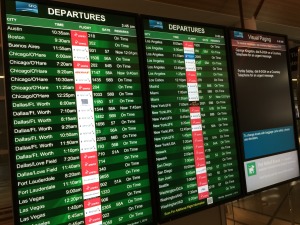 SFO Departure Board – Showing all flights arriving “on time.” Situation has been changing by the minute. Monday, December 1, 2014

“We’re pretty use to rain in DC so it didn’t seem like a big deal. Yeah, everything seems to be fine so, glad it worked out,” said traveler Jesse Achtenberg.

Weather is expected to be an issue at SFO over the next two days.